If seeing hippos up close is on your family’s bucket list, you’re in luck because the only aquarium in the world where you can see them is at the Adventure Aquarium in Camden, NJ. If that’s not impressive enough, there’s more—this aquarium (rated #8 in the country by USA Today) also has the largest collection of sharks in the Northeast and is one of only six facilities in the United States to have Little Blue Penguins. On a recent visit, we had a fantastic day of interactive fun, from the shark bridge to the Shark Tunnel to over 15,000 aquatic animals. Ready to spend a day here? Scroll down for what you need to know before you go. And while you are in Camden, don’t miss the Battleship New Jersey and nearby Philadelphia, with its unique things to do. (featured photo credit: @vikki_1110)

A Day at Adventure Aquarium 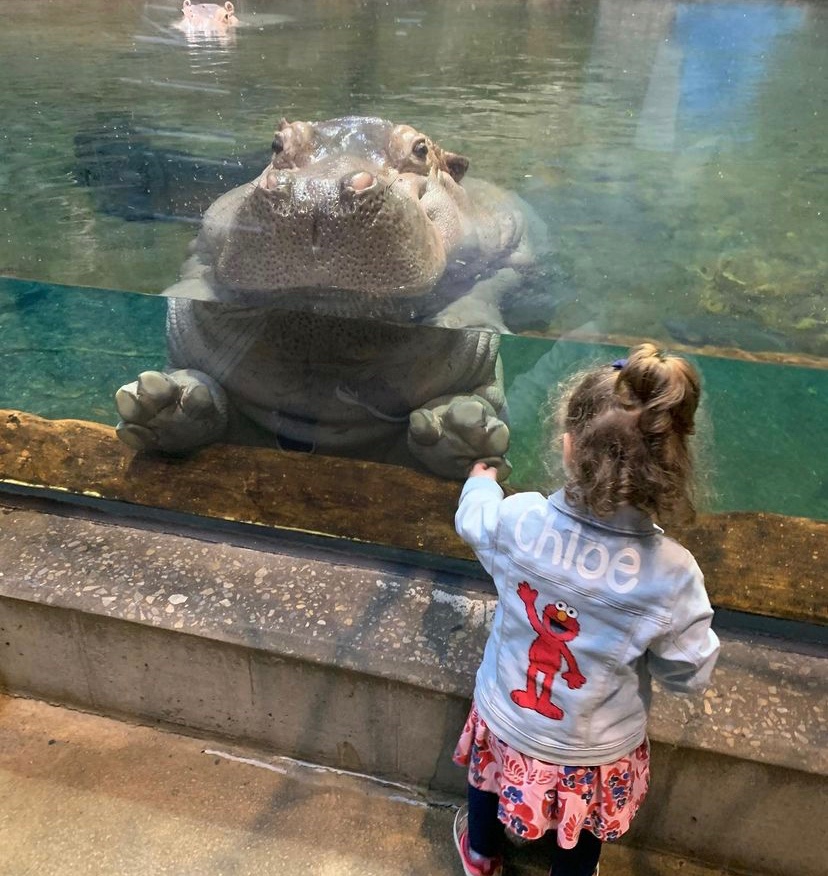 Visit with the hippos at Adventure Aquarium

Walking into Hippo Haven was a memorable experience and the size and sheer presence of the hippos is a feeling we won’t forget. The two residents—Button and Genny— come in at a whopping 3,000+ pounds each, and we could see them at angles both above and under the water. Encountering these Nile hippos was a one-of-a-kind treat, and both my kids (us, too) were in awe of such beautiful creatures. Though we didn’t have time, we hope to upgrade our tickets and take a step behind the scenes to immerse ourselves in a Hippo Encounter next time. Take a walk through their 40-foot shark tunnel, where sharks surround you at every angle. Photo Credit: @danamarie127

My son and daughter both said the sharks were a must-see, and we found many interesting ways to see them. We started with a mesmerizing walk through the 40-foot shark tunnel—it’s an experience that put us right in on the action, and it felt like the Sandbar, Sandtiger, and Nurse Sharks were coming right for us. It was a spot we couldn’t just walk through without oohing and ahhing at every predator that swam by—we stayed for a little while because there was so much to see. What came next, though, was even more impressive. We hopped onto the longest, V-shaped rope shark suspension bridge in the world, hovering above the 21-foot-deep Shark Realm exhibit. My kids were braver than me and walked the 81-foot walk over 550,000 gallons of water without trepidation. It was a memorable and exciting way to see the sharks. After that, we couldn’t miss the Touch a Shark tank, where the kids could pet a Bamboo Shark in the water—they were thrilled! Don’t miss the Penguin Park exhibit to learn more and catch a glimpse of the tiny babies. Photo Credit: @morgantilton

We thought we needed a little break, so we headed to Penguin Park, with a soft play area in the outdoor part of the aquarium. As the kids played on the equipment, we couldn’t miss the African Penguins waddling, swimming, and playing in their outdoor habitat. Back inside, we saw the smallest species of penguins in the world, the Little Blue Penguins, also known as “fairy penguins” for their slate-blue plumage and small stature. They’re native to southern Australia and New Zealand, and Camden Adventure Aquarium is one of the few aquariums you can see these adorable birds in the U.S. We learned that they are a diurnal species, and they spend the most significant part of their day swimming and foraging at sea. They also preen their feathers to keep them waterproof by rubbing a tiny drop of oil onto every feather with a special gland above their tails. The kids were interested in learning more about these curious-looking birds and especially liked watching them waddle around. 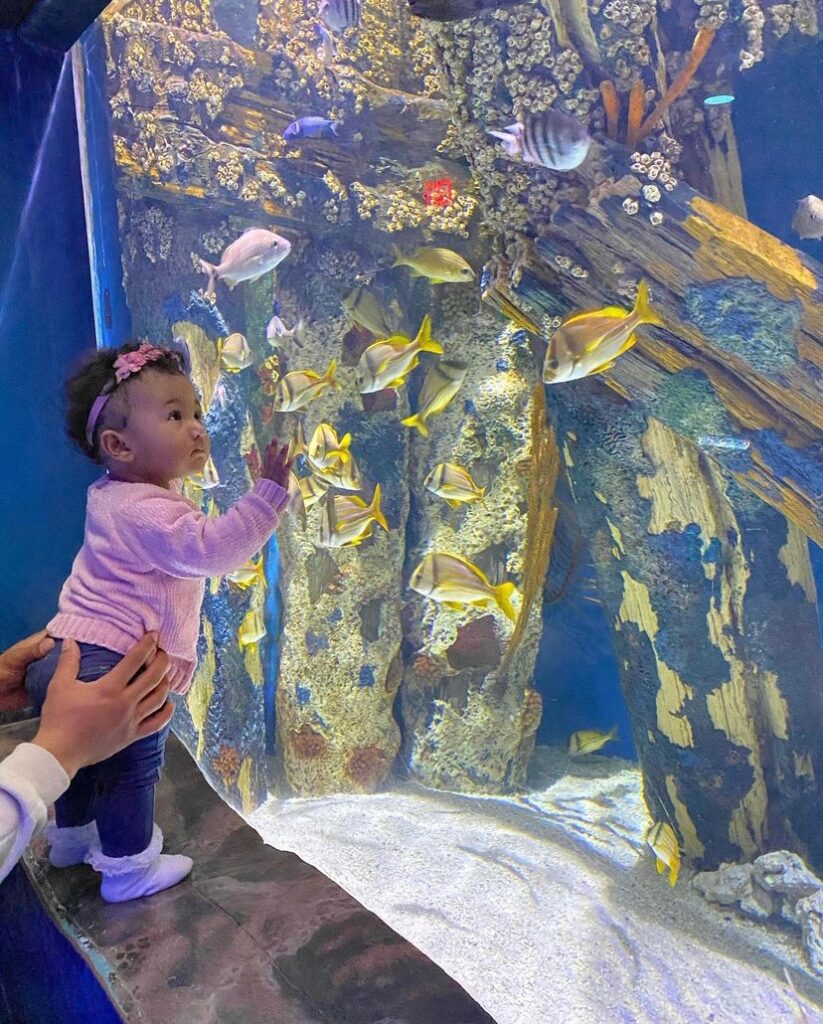 There are so many things to see under the sea at Adventure Aquarium. Photo Credit: @lauren.goblirsch

More Under the Sea Adventures

As we made our way through the aquarium, another highlight was the Ocean Realm exhibit with 760,000 gallons of seawater and over 400 types of animals, including stingrays and a hammerhead shark. We also couldn’t miss watching the Amazon come to life at the Piranha Falls exhibit, where piranhas swim, and a “storm” happens during the exhibit to demonstrate how sea life copes with swirling waters. At Pirates Passage, we saw tropical fish and eels, but our favorite was the delicate seahorses. The round windows in Sea Turtle Cove gave us a glimpse into the lives of sea turtles. The kids were hungry, and we found many options, including sandwiches, salads, pizza, and hot dogs. We decided to eat outdoors at the Flying Fish Beer Garden, where we ordered giant, warm, and crusty Bavarian pretzels that were big enough to fit in their own mini pizza box—it was definitely a favorite for us all. If you prefer to eat indoors, there is a large cafeteria area with lots of space to take a lunch break (and good to know, you can bring food in). Explore the 21-foot-deep shark tank at Adventure Aquarium and learn about sharks from all over the world. Photo Credit: @sarah.drzewiecki

Reach out and touch the sea life

It’s easy to see why the touch tanks were a big hit with our family—as the Bamboo Shark swam by, the kids were thrilled to reach out and pet the sea creature. At the Creature Feature exhibit, there was also an area with seastars, anemones, and sea cucumbers. Both kids were in awe when they could hold a seastar in their hands. At Stingray Beach Club, not only did it feel like we entered a tropical oasis, but we got to get up close and personal with the stingrays and touch their backs—another highlight on a terrific day under the sea. As we emerged into real life, we realized we were hooked on Camden Adventure Aquarium and started talking about our next visit before we even got into the car. Be sure to check out the Sea Turtle Encounter, where you can train, tong-feed, and care for green and loggerhead sea turtles. Photo Credit: @theanthonycamp

What to know before you goIt takes about 2-3 hours to explore the aquarium, and you can purchase tickets, an annual membership, regular membership, or a gold membership to enter the aquarium. You can enter the aquarium up to 30 minutes before and after your scheduled time, and reservations are encouraged. General admission is $18.99-$44.99, and memberships are $39.99-$59.99. Strollers are welcome; there are also baby-changing stations and a nursing room. The aquarium is sensory-inclusive, with sensory bags, a designated quiet area, and a weighted lap pad. There are special events like Scarecrows of the Sea in the Fall and Christmas Underwater during the holidays, and during certain times of the year, real-life Mermaids swim in the tanks along with the 15,000 creatures.

What do you plan to see first at Adventure Aquarium?

Melanie Bodner has always had a love for writing, but now she has a new love…being a mom. Before having her kids, Melanie was no stranger to writing or working with children. She wrote for a local newspaper as a reporter and taught English and Dance in a public school. Now Melanie enjoys spending time with her kids, doing yoga, writing and decorating her home. Check out her Instagram @burlapbythebeach.