One of the best things about living in The Garden State is showing your kids a real piece of our country’s history at the many historical sites in NJ. Of course, we’re lucky to have sites dating back to the Revolutionary War when Washington fought important battles that led to our freedom, but there are other historical places your family won’t want to miss. See where Thomas Edison invented electricity and motion pictures, the terminal where immigrants first landed on US soil, and some of the oldest iconic landmarks in the country. Ready to step back in time? Scroll down for the historical sites in NJ you and your budding history buffs should have on your bucket list. (featured photo credit: @kateystanley)

These are the 16 Best Historical Sites in NJ The Historic Village at Allaire
This historical site in NJ started as an industrial town that quickly became a thriving, self-sufficient town of 400 people. These days, you and your crew can visit 13 of the original buildings (11 are detailed here). Swing by the carpenter and blacksmith shops to watch the volunteers at work, and then stop by the general store to buy items that they made on-site, like necklaces (blacksmiths), dolls (textile artists), whistles (tinsmiths), and purses (leather smiths). And don’t forget to pop into the bakery for some fresh treats. Learn more about it with our guide about Allaire State Park.
4263 Atlantic Ave., Farmingdale, NJ 07727
(732) 919-3500

Historic Smithville
This charming town gives you a glimpse into what a village looked like back in the 19th century with cobblestone streets, footbridges, and pretty lake views. Historic Smithville started as a seven-acre stagecoach stop with one building—The Smithville Inn, and grew into a representation of a historic village, with buildings restored and repurposed into stores and eateries over the years. Kids will love riding the train and carousel. Pop into Toy Market, and then stop by Scoop’s Place for some refreshing ice cream—and don’t forget to swing by Sweet Things to grab some candy before you go.
615 E. Moss Mill Rd., Smithville, NJ 08205
(609) 652-7777 (The Smithville Inn)

Central Railroad of New Jersey (CRRNJ) Train Terminal
Most of us can probably trace our U.S. beginnings to the CRRNJ train terminal. In 1892, when the immigration station on Ellis Island opened, about two-thirds of the immigrants made their way to the terminal and then continued their journey further into the U.S. or settled in NJ or NY. Learn more about the Central Railroad of New Jersey and the surrounding area in our NJMOM guide of 9 Things To Do At Liberty State Park.
1 Audrey Zapp Dr., Jersey City, NJ 07305
(201) 915-0615

Lambert Tower
This 70-foot tall tower, built in 1896 by Catholina Lambert, an English immigrant and silk mill entrepreneur, has panoramic views from the top with a nod to British royalty. While the Lambert Castle was built just a few years earlier, in 1892-1893, both the castle and tower were built in the style of the castles in Great Britain (where Catholina was raised). Climb to the top for the most amazing views of the Garret Mountain Reservation.
Lambert Castle Valley Road, Paterson, NJ 07505
(973) 881-4832

The Sterling Hill Mining Museum
This museum was once a well-known zinc mine and one of the world’s best sources of zinc ore. The open-pit-turned-underground-mine, which had 35 miles of tunnels, stopped operations in 1986. The original tunnel area is flooded, but you can still visit the upper level. It currently has the world’s most extensive collection of colorful fluorescent minerals, which will fascinate big kids and littles (they’ll also want to pan for minerals in the Sluice mining station). We love this site so much that we included it on our 7 Strange NJ Attractions You’ll Want To Check Out.
30 Plant St., Ogdensburg, NJ 07439
(973) 209-7212

Haddonfield’s Dinosaur Discovery Park
In 1858, a group of diggers excavated an almost-complete dinosaur skeleton in a Haddonfield farm—up until then, researchers had found only small, seemingly unconnected pieces in Europe and North America, proving dinosaurs were indeed on this continent. While you won’t see the skeleton, you can stand where the dinosaur was discovered and once roamed in this mini-park at the end of a suburban street. You’ll know you’re there when you see a couple of low-key historical plaques and a bench.
End of Maple Avenue, Haddonfield, NJ 08033
(609) 313-6648

Weehawken Dueling Grounds
If you know, you know—this is the site of the famous duel between Alexander Hamilton and Aaron Burr, a key part of history and a pivotal scene in the Broadway hit Hamilton. The duel took place on a ledge on the cliffs, below where a bust of Hamilton sits to commemorate the spot. (The actual dueling ground no longer exists because of a railroad line built-in 1870.) After you and your fam explore the history, relax in the adjacent Hamilton Park and enjoy a picturesque view of the Manhattan skyline—make sure to get some photos of your kiddos for the ‘gram.
Hamilton Ave., Weehawken, NJ 07086
(201) 319-6005 Historic Speedwell makes a lovely place to explore— with a park featuring a small waterfall and lake and a walking trail. Photo credit: @kateystanley

Historic Speedwell (Currently Closed)
The origins of the Industrial Revolution began here when Samuel Morse and Alfred Vail showed people their electromagnetic telegraph in 1838, ushering in a new way to communicate messages across far distances through electric currents known as Morse Code. While the 18th-century buildings and interactive museum are closed, it’s still a lovely place to explore with a park featuring a small waterfall and lake and a walking trail.
333 Speedwell Ave., Morristown, NJ 07960
(973) 285-6550

Thomas Edison National Historical Park
The father of electricity, Thomas Edison, created many of his groundbreaking inventions in West Orange including the motion picture camera, higher-quality phonograph, sound recordings, silent movies, movies with sound, and an electric storage battery.  Stop by the visitor center to see a short film about Edison’s life and work, head to the laboratory where you can see where Edison worked, and then visit the grounds around his estate, Glenmont.
211 Main St., West Orange, NJ 07052
(973) 736-0550

Absecon Lighthouse
Head to the shore to check out one of the oldest lighthouses in the U.S., built over 160 years ago in 1857 and the tallest one in NJ. If you and your fam decide to make the trek up the 228 steps, you can see the original Fresnel lens (a classic lighthouse lens), which was first lit in 1857, as well as fantastic views of the Atlantic City skyline—make sure to have your phone at the ready for some great candid shots. Don’t miss our feature on the one and only Absecon Lighthouse.
31 S. Rhode Island Ave., Atlantic City, NJ 08401
(609) 449-1360

Lucy the Elephant
It may be kitschy, but that’s part of the fun—one of the oldest roadside attractions in the US and a National Historic Landmark, Lucy the Elephant, stands at six stories high and was built 140 years ago in 1881 to attract real estate buyers to the area. Although tours are temporarily suspended due to construction (they’re expecting to resume after Memorial Day), stop by and see Lucy while she is being restored.
9200 Atlantic Ave., Margate, NJ 08402
(609) 823-6473 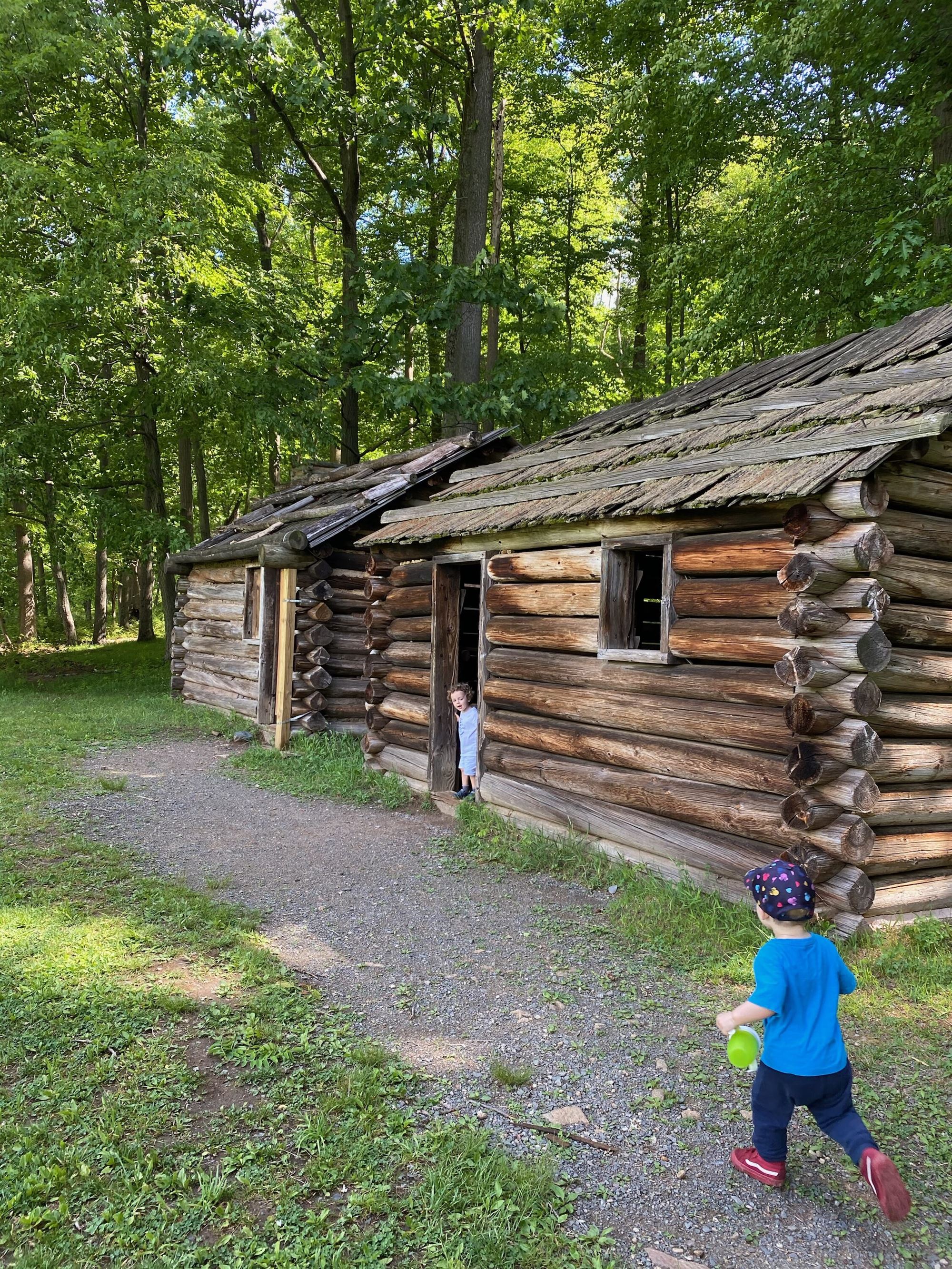 Stepping back into the 1700s at Jockey Hollow, where soldiers stayed in these log cabins (since re-created). Photo credit: @kateystanley

Jockey Hollow
Your whole family will want to explore Jockey Hollow, the area where the Continental Army camped out during the winter of 1779 to 1780 (the coldest winter on record) and chopped down over 600 acres of trees to build shelter and make fires. Kids will love running up the hill to step inside the recreated log cabins where the soldiers and officers lived during that winter. After, they can learn the story of Tempe Wick and how she kept a horse in her bedroom at the restored Wick House, located in the lower part of the park.
586 Tempe Wick Rd., Morristown, NJ 07960
(973) 543-4030

Washington Crossing State Park
George Washington famously crossed the Delaware River to this side from Pennsylvania on Christmas night, 1776. For almost 10 hours, boats traveled back and forth to bring people, horses, and supplies over into NJ. They then marched into Trenton and secured a significant victory (capturing 900 enemy soldiers) on December 26. Have your kids pose to recreate the iconic painting of his crossing on display at the Met—and snap a photo of them for the ‘gram.
355 Washington Crossing-Pennington Rd., Titusville, NJ 08560
(609) 737-0623

Princeton Battlefield State Park
Early the following year (1777), the Battle of Princeton secured another victory for the Americans. After ten days of fighting—and three battles—George Washington led American troops to surprise and defeat a British army in one of the most intense battles of the Revolutionary War. The park has many monuments and historical landmarks that you can check out, including the Princeton Battlefield, the Clarke House Museum, the Mercer Oak, the Ionic Colonnade, and the medallion, a stone patio marking the approximate gravesite of 21 British and 15 American soldiers killed in the battle.
500 Mercer Rd., Princeton, NJ 08540
(609) 921-0074

Monmouth Battlefield State Park
The battle that took place here was a critical turning point in the Revolution. The American army had experienced many losses in 1777, but here in June 1778—after one of the longest battles of the war—they managed to keep the British back and hold the field. Take a history hike to see where Washington’s Army fought the battle and observe the wildlife and meadows along the way.
16 State Route 33, Manalapan, NJ 07726
(732) 462-9616

Washington’s Headquarters
One of the centerpieces of Revolutionary War history in NJ, this Georgian-style mansion was initially owned by Jacob Ford Jr., a prominent Morristown businessman, and served as George Washington’s military headquarters from December 1779 to June 1780. You can visit the mansion and several galleries with military memorabilia from the war, 18th-century artifacts, and notable artworks. Kids will enjoy touring the estate, fully furnished in eighteenth-century style with original pieces to replicate what it looked like while Washington stayed there.
30 Washington Place, Morristown, NJ 07960
(973) 539-2016

How many of these historical sites in NJ are on your bucket list? We would love to hear about them!

Caroline is a writer from central Jersey who loves checking out new boardwalks and beach towns (current faves include Long Branch and Ocean Grove), admiring the foliage and walking around downtown Princeton, and singing along to music—often with her younger sister. One of her favorite jobs was being a camp counselor and helping out at local, family-friendly events. She can regularly be found ordering a pie to go from Romeo's in Plainsboro, her favorite pizzeria.