If you ask my kids, SpongeBob SquarePants is practically a member of my family. He’s with us all the time— singing tunes from the car headrest monitors, happily dancing on our big screen TV, speaking out on their tablets and sometimes, he emerges from the depths of our toy box for guest appearances. So naturally, when I heard that Nickelodeon Universe opened just 15 minutes from my house in East Rutherford, I was all in—we’ve traveled farther than that for fun. And since a certain, lovable sponge would be in the flesh to greet my 4-year-old son, 8-year-old daughter and 5-year-old goddaughter—plus two record-breaking roller coasters—I knew this would be the best day ever, as their buddy likes to say. 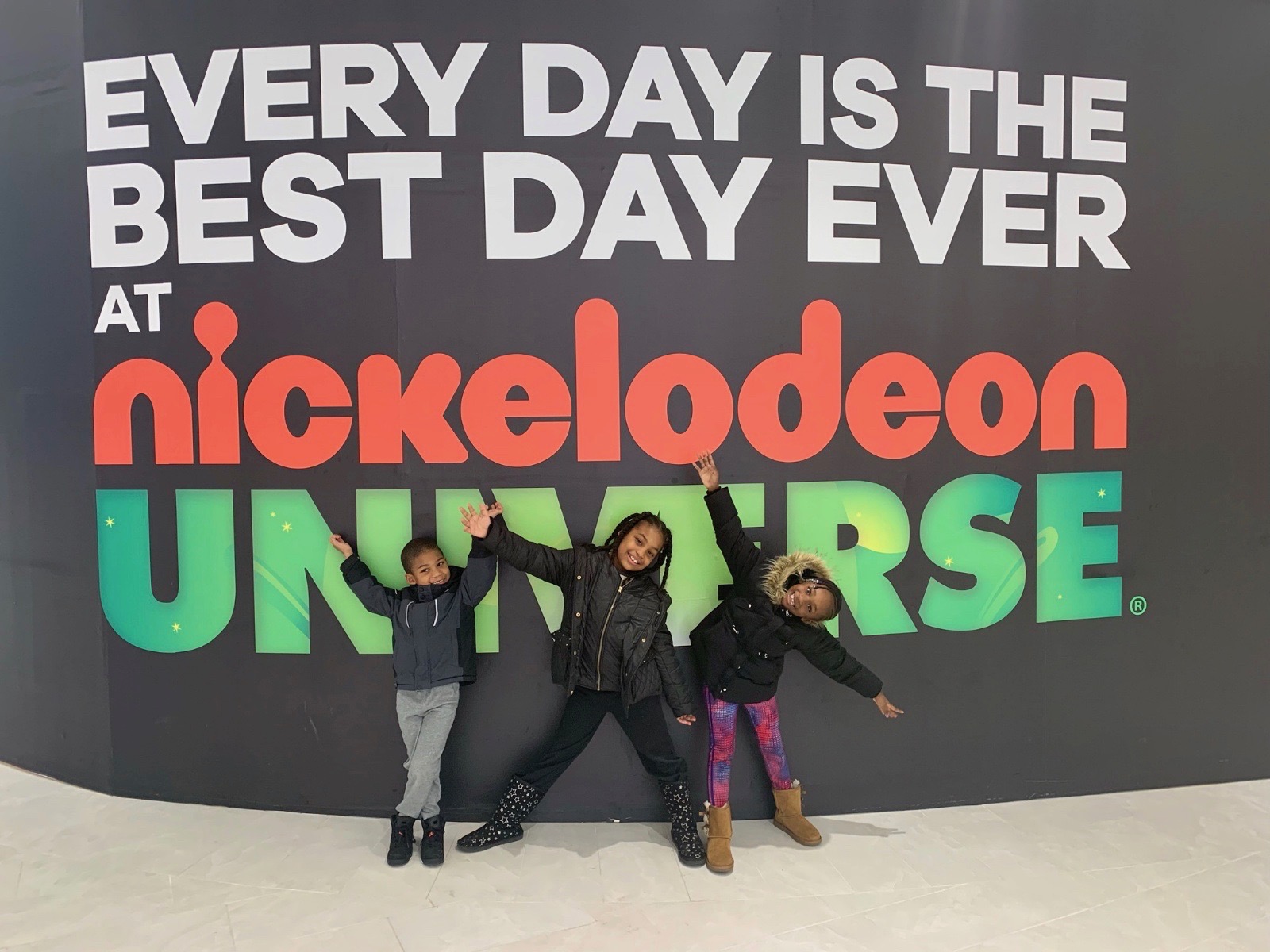 And they’re not lying!

I did some research and found that the 8-acre indoor theme park at the American Dream complex is the second of its kind in the country (the other is at Mall of America in Minnesota), and the biggest indoor theme park in North America. Despite those impressive facts, I wasn’t expecting anything that would make this park more awesome than any other that I’ve been to, but I was pleasantly surprised at how cool it really is—and that we never have to worry about a sudden downpour or cold temps.

As we descended the escalator at the entrance, there was so much eye candy (hello SpongeBob!) that my kids were pulling at me in every direction. My husband and I quickly implemented our strategy: We would divide and conquer because my daughter and goddaughter could totally take on the thrill rides, and my son would have a ball exploring the themed attractions that were more geared toward littles. 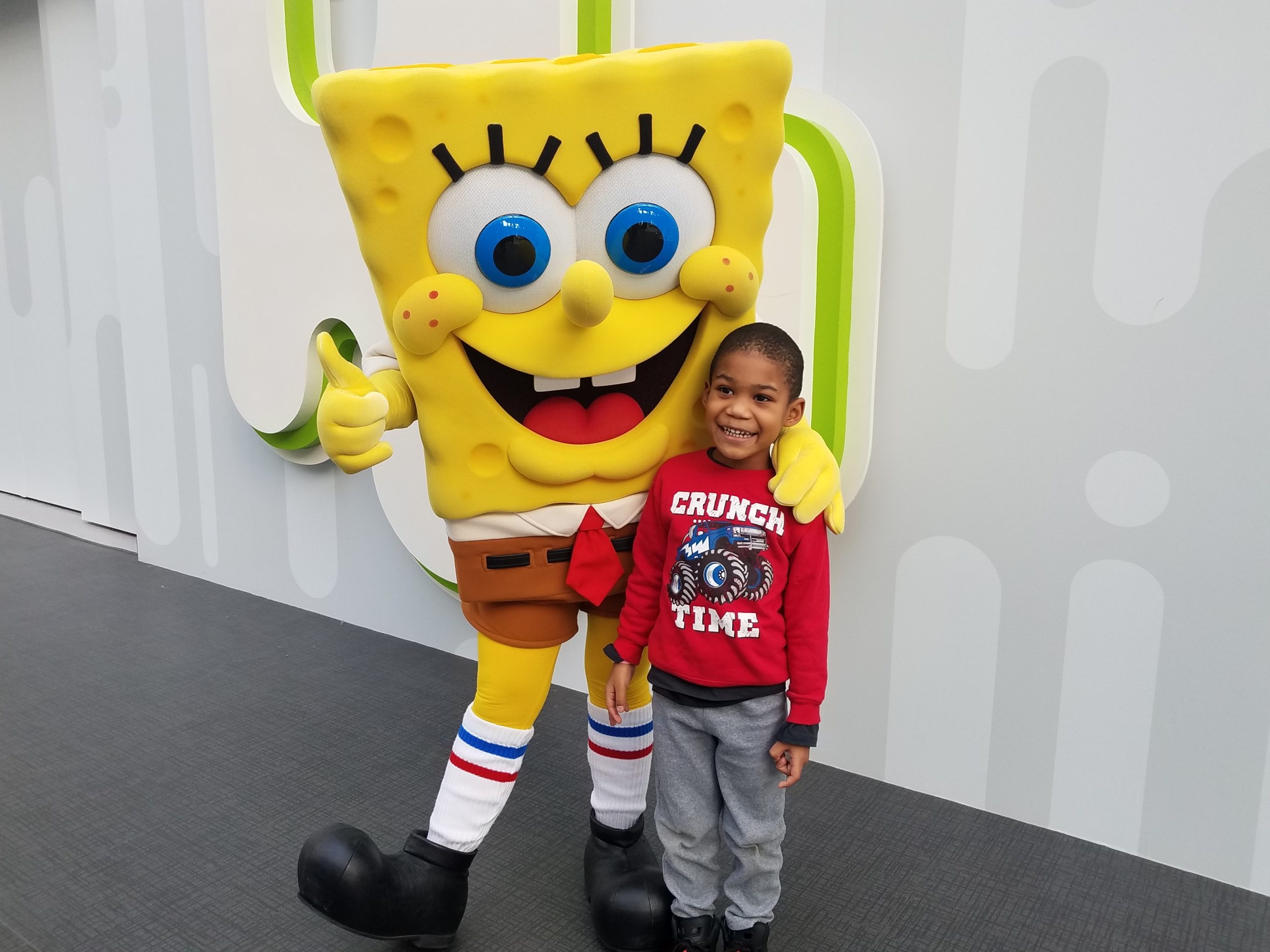 Cheesing it up with his ‘bro and favorite character.

Before anyone got strapped into a ride, though, we had to get in our meet and greets with a parade of Nickelodeon characters including Boots from Dora the Explorer, Teenage Mutant Ninja Turtles, and Chase from Paw Patrol. The highlight for my kids of course was SpongeBob and his sidekick Patrick. My kids waited patiently (there was a short line) to get up to the stage and pose for photos with their honorary brother.

After, we all headed to the split-level Paw Patrol playground in the middle of the park. My son was having a ball on the slides, pits and foam blocks in the Adventure Bay area that’s designed for younger kids. The girls were clamoring to try the rides, so my husband parked on one of the long benches lining the sides and we headed to more serious thrills.

The first was SpongeBob’s Jellyfish Jam, which looked like the type of wave swinger you’d see at Great Adventure or boardwalk amusement parks. The ride started typically, rising and spinning slowly in a circle. It felt like we swung in slow motion for 20 seconds before coming back down. But then a few seconds later, the ride ascended to an even greater height and swerved with near dizzying speed. I was blown away—this wasn’t like any wave swinger I’d ever been on. 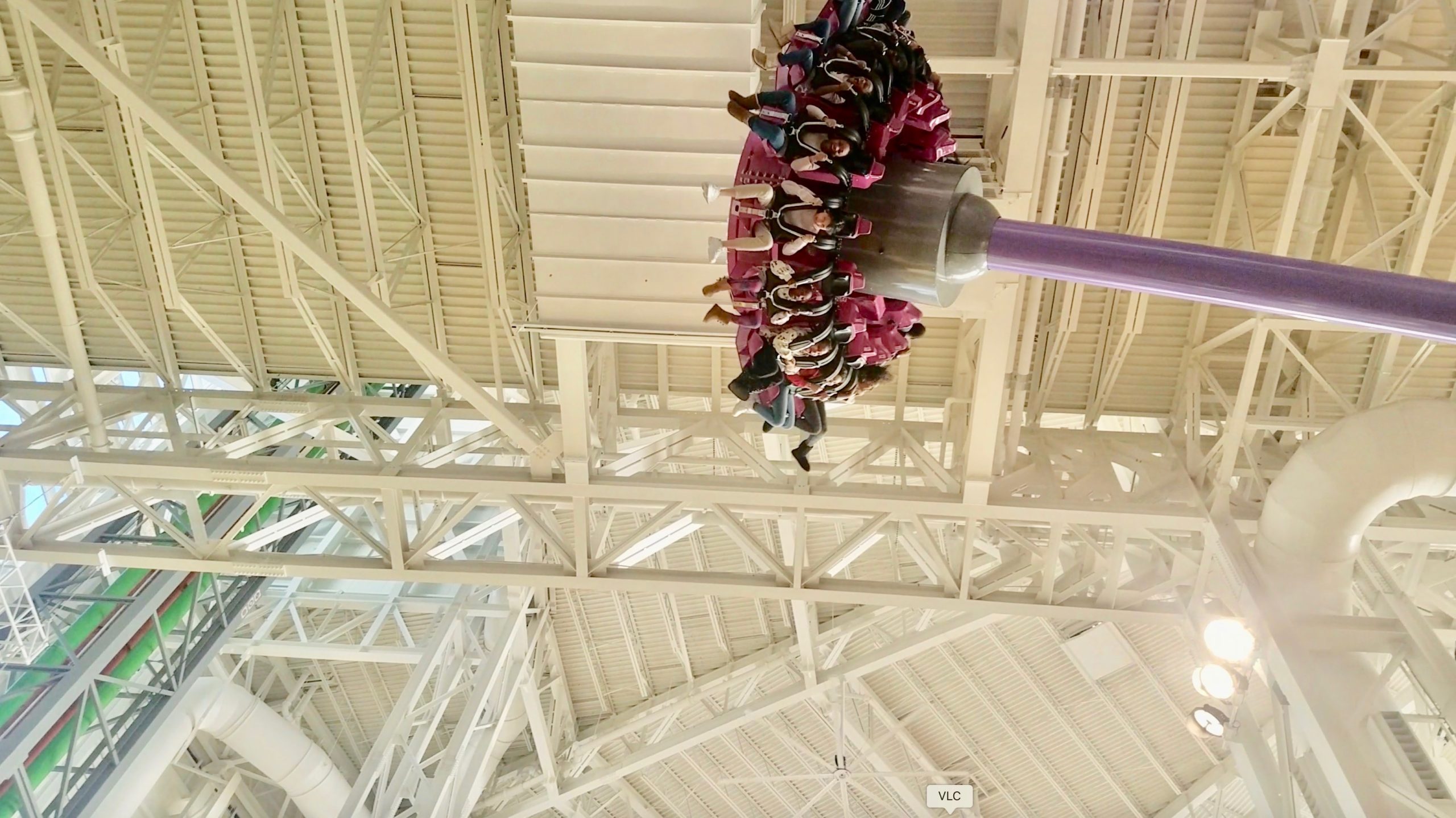 My girls taking on the Kraang Prime Pandemonium!

After, I needed a moment to steady myself, so I watched my girls brave Kraang Prime Pandemonium!, a pendulum ride that does 360˚ loops in both directions and even leaves riders upside down for a few seconds at the top. My daughter loved it, but after that, my goddaughter proclaimed her thrill ride experience was over. She was staying on land and joined my son at the playground.

With that, I became my daughter’s only ride buddy. She made a beeline for the TMNT Shellraiser, the world’s steepest roller coaster at a 121.5˚ angle. Yes, I’ll admit, I love roller coasters, but I was not prepared for this, even though I could firmly see the purple track spiraling across the length of the park and thought it was going to be an easy one. We got strapped in, and the ride started with dips and spirals, then slowed before shooting off—we went from basically 0 to 62 miles per hour in an instant. As it slowed again, we ascended the 90˚ angle to the 141-foot summit, then stopped for a few seconds at the top, giving us a landscape view of the NYC skyline and Met Life Stadium, and then it happened—we dropped (as well as my heart) as we sped down swiftly to the end for a sudden finish. Whew—but guess what? I couldn’t wait to go again. I’m proud to say I survived the Shellraiser twice, and it’s now one of my top five favorite coasters.

My husband and I swapped at Adventure Bay so my he could ride the Shellraiser (my daughter went for a third time) and a few other roller coasters. Meanwhile, I was ready for a more tame experience, so I took my son to the rides geared for the younger set, including the Rugrats Reptar Go-Round Carousel, Pup Pup and Away Ferris Wheel, and Dora’s Sky Railway,  which was awesome, because it’s a slow, elevated train ride that takes you around the entire park, and you can sit and get a bit of a rest. After, my son made a beeline right back to Adventure Bay—he loved it so much, he opted to skip the free face painting that my girls wanted to do.

By the end of the day, stomachs were growling, since we only had chips and water from the snack stands (next time, we’ll have better choices, since American Dream will eventually have over 100 eateries in the complex). Still, after 8 hours, we could have done more: My daughter didn’t get to try her skills at the Legends of the Hidden Temple Challenge ropes course or ride The Shredder, the world’s tallest and longest free spinning coaster at 1,600 feet. There are also more rides to come later this year, including the Invader Zim’s Flip & Spin…OF DOOM!—it’s like bumper cars, but riders sit in bumper chairs that flip upside down. 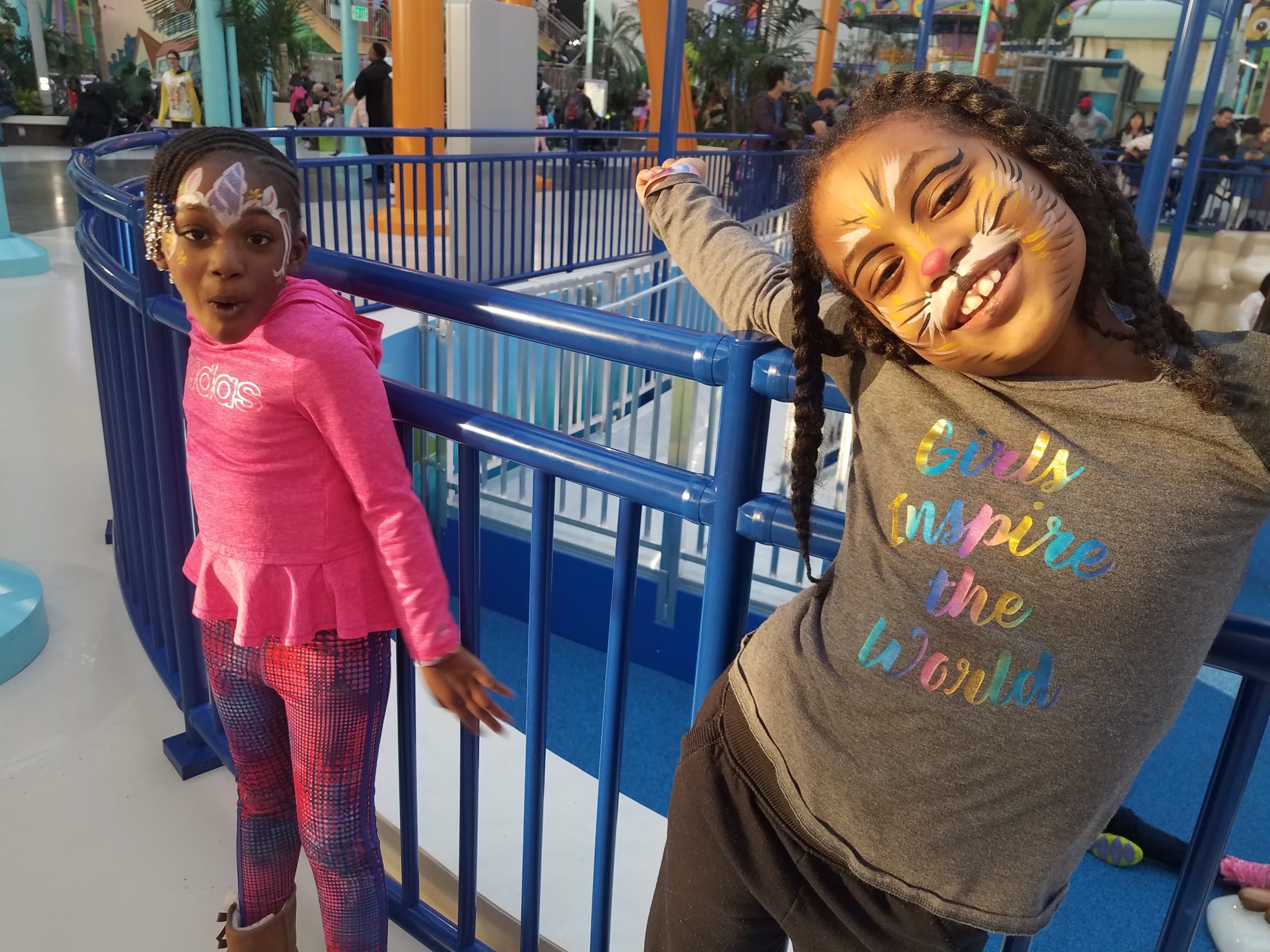 Face painting was the cherry on top of a fun-filled day.

On the way out, we were drooling through the window at the soon-to-be-open indoor DreamWorks Water Park, the largest in the Western Hemisphere. We also peeked in at the indoor skating rink packed with skaters and heard that there’s a ski mountain (yep, an actual indoor ski facility with manmade snow).  But in the meantime, we’ll definitely be back for another spin at Nickelodeon Universe. The kids were already dreaming of the next on the car ride home—SpongeBob videos not needed.

Shanida is always on the search for memorable experiences for her inquisitive son and thrill-seeking daughter under 10. You may see them often at the SeaQuest Aquarium in Woodbridge, Newark Museum of Art or Sky Zone in Springfield. When this former TV news producer isn't writing, teaching, producing videos or working on her daughter's YouTube travel channel, she's outside at her favorite Jersey beach, Sandy Hook, or snagging some rare mommy time in Atlantic City.