Ever since my son built his first LEGO® figure, he’s been hooked on creating cities and fantasy characters with those brightly colored bricks. My younger daughter has recently caught on too, so when I heard we were a mere two hours from the largest LEGOLAND® Park in the US, I knew we had to go. We decided to make it a surprise, and on the way up across the NJ state border to Goshen, NY, in the Hudson Valley, my husband and I were excited to tell them that they were headed to 150 acres of pure block-building awesomeness at the LEGOLAND New York Resort. It is the stuff of their LEGO dreams, and then some—vivid colors, amazing builds, and high-energy rides awaited us for a memorable family getaway. And after a day filled with fun, we stayed overnight in the kingdom-themed room at the resort hotel in the park. For our little LEGO builders, this was their nirvana (and we didn’t need to hop on a flight to CA or FL, sites of other LEGOLAND locations). Read on to learn more about our LEGO getaway and what to know if you plan to go. (Photo Taken at LEGOLAND New York Resort) 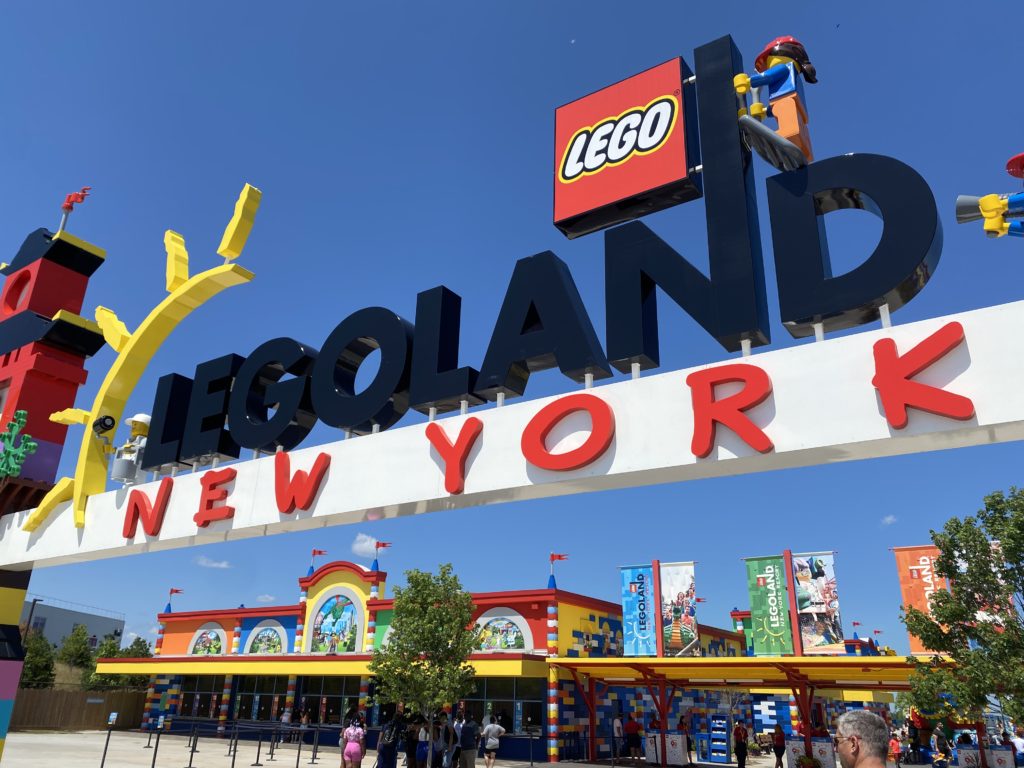 LEGOLAND New York Resort, is a must-see for the whole family.

When we entered LEGOLAND, catchy tunes played throughout, making my kids even more excited to start our day. There are seven lands to visit in the park, and each has unique rides and things to do. On Brick Street, we rode the Brick Party Carousel with a DUPLO chicken, motorcycle, and tiger build. At Bricktopia, my kids loved DJ’s Dizzy Disco Spin ride and the LEGO Factory Adventure Ride, which gave us an inside look at the action and nitty-gritty of brick creation. LEGO Ninjago World is where we hopped on Jay’s Gravity Force Trainer, a ride that trains you to travel like a Ninja during high speeds and G Forces. The LEGO Castle was our favorite spot with Merlin’s Flying Machines, the Tower Climb Tournament (a real workout going up but with gorgeous views at the top), and The Dragon Roller Coaster, which our kids said was the best ride. In LEGO City, we felt like we were walking through a city and tested our skills at the Driving School with drivable cars (my kids earned their LEGO driver’s license) and the Fire Academy. We sprayed the “fire” with water in this competitive firetruck race. LEGO Pirates was another favorite with its variety of water rides and ability to squirt passing ships from the sidelines. Lastly, MiniLand has miniature cities of 10 destinations like Las Vegas, New York City, and Washington, DC. We were fascinated by the attention to detail on the models as horses raced and a subway moved through NYC. The whole land is filled with about 22,231,368 bricks and is an excellent spot to stop when you need a ride break. You can create your own LEGO brick build and then place it right on the globe for all to see.

Get creative with classes, builds, and trades

There are so many beautiful and colorful buildings and statues at the park and hotel, and we loved admiring them throughout the day. Rebuild the World is a giant globe surrounded by bricks, where we created a build and attached it to the globe. At Build & Test, they gave us wheels to create our own cars, which we could race with others. My kids also built skyscrapers and tested them on the shake pad to see if they held up (they did). We also booked a class at the LEGO Creative Workshop, where the kids trained to become Master Builders as they followed directions to make a build. These classes made for a creative day that wasn’t just about the rides—they honed their skills and learned new ways to create for when they are at home. Another fun option? Buy or bring mini-figures for trades. You can find a location with several trade choices in one area, or you can stop a LEGOLAND employee and trade with them (they have an example of their figure on their nametag). My son found some great new mini figures while we were there, and the mini figures with the “I Love NY” shirts are truly unique, so of course, we had to trade for one of those. 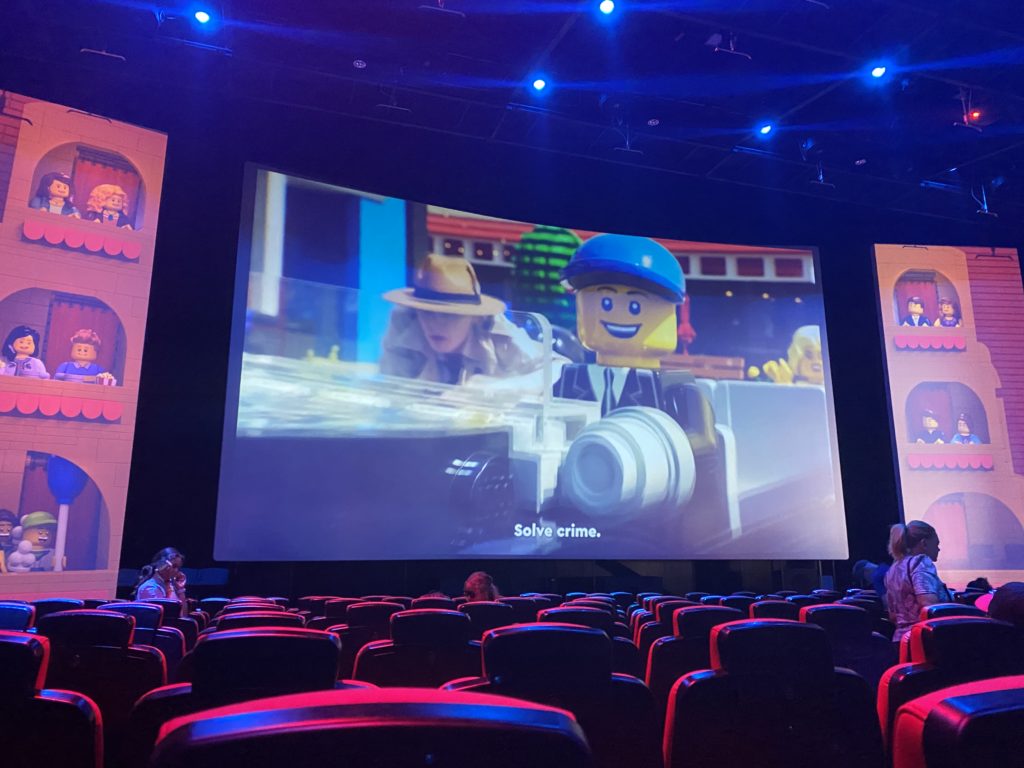 LEGOLAND New York Resort is full of entertainment, both indoors and out.

Everywhere you turn at the park, there’s entertainment. We watched the energetic Earth Beat with Ninja-inspired music and drumming at NINJAGO World; sang along to popular LEGO movie favorites like “Everything Is Awesome” at the Bop at the Top show at Brick Street Plaza; and enjoyed Heroes Are Everywhere at the LEGOLAND Theater. We also stopped at the LEGO City Cinema to see the 4D show: Officer in Pursuit. We wore 4D glasses, and let’s just say there were lots of surprises (hello, water) that really made us feel like we were a part of the movie. Several playgrounds throughout the park are the perfect places to let your little one loose between rides.

Shrink to a LEGO figure at the playground

One big perk of the park was the playgrounds, which are great take-a-break spots for kids to run around and for us to sit and relax. They were a welcome respite, especially with the long lines. In LEGO City, there is a boat and coast guard climbing area, and in LEGO Pirates, a  ship to explore and dry off after all those pirate water rides. Both playgrounds are fenced-in, and they have several levels that encourage kids to slide, explore, and climb with rubber padding in case of falls. My kids loved feeling like they were characters in a LEGO world. LEGO MiniLand is a fascinating look at the world in miniature.

Fuel up and then shop till you drop

After a day at the park, my kids were delighted to bring home their own sets from the largest LEGO store in North America. You can shop in all different categories, like Minecraft, Friends, and LEGOLAND Park, to find unique sets (if there’s a rare one you’ve never found before, it’s probably here). It was so big we spent a good amount of time here before making a souvenir purchase of a set they both wanted to work on. After all that shopping, we needed to refuel and explore the restaurant choices. There are a lot of fast food options in each area for pizza, burgers, hot dogs, and BBQ, as well as a few dine-in ones with mobile ordering. We ordered tacos from Everything Taco, and the kids feasted on chicken fingers and ended with ice cream at Brickbeard’s Food Market.

We stayed in the Kingdom-themed room, and not only was there a fantastic place for the adults, but the kids also had their own special space.

A room perfect for a king or queen

Our fun didn’t end when we left the park. We grabbed our overnight bags from the car in the parking lot and went directly to the LEGOLAND New York Resort Hotel (a 5-10 minute walk from the park) and it’s on our our list of must-see resorts. At the hotel, we could meet LEGO characters, sign up for building classes, visit the retail gift shop, see a wall of over 5,000 mini figures, and swim in the outdoor pool. While you check in (online check-in is available, too), there is a castle and pirate ship perfect for littles to explore and, of course, bricks all around, so if the mood strikes, you can get creative. Once we received our room keys, we headed toward our room, riding up in the Disco Elevator with upbeat music and lights adding to the excitement. When we walked into our Kingdom-themed room (there are also other LEGO themed-rooms like Pirate, LEGO Friends, and Ninja), we couldn’t believe the attention to detail everywhere— it felt like you were in a real castle. As we settled in, we discovered a ladybug, snail, and even a spider within our quarters (ha—all made from LEGOS). Thanks to bunks and a trundle bed, the separate kids’ area had plenty of space and an entertainment unit so my kids could chill before bed.

We found directions for a scavenger hunt in the room, and when the kids solved the puzzle, they put the code into the safe with LEGO surprises inside to keep. It was a perfect ending to our LEGO-themed day. The next morning, we feasted like kings and queens at the Breakfast Buffet at Bricks. It’s included with the room, but you need a reservation (there are reminders in the room if you forget). My kids were fans of the waffles, and it didn’t hurt that there was whipped cream to put on top. As we left with the LEGO skyline in the background, we knew our kids weren’t the only ones who had a great time—it was a fantastic mini-vacay for the whole family to enjoy. Yes, this Statue of Liberty is entirely made out of LEGO bricks.

What to know before you go

All guests are required to make a reservation before attending the park. I highly recommend downloading the LEGOLAND app and buying tickets ahead ( the price fluctuates according to the date, but expect to pay about $80 per ticket). You can build your own vacation package or splurge on the Ultimate VIP Experience with an official LEGO VIP guide and a variety of perks, including lunch, priority access to rides and attractions, reserved seating at shows, and keepsakes. If you want to cut down on wait times (or have kids who can’t wait in line), sign up for Reserve’ N’ Ride, which you can purchase through the app. There are other options to buy, too, like a souvenir cup with unlimited refills all day, prepaid parking for a quick exit ($25 a day), and stroller rentals. If your little builder wants to create, sign up for free LEGO classes at the Creative Workshop in the park or at the hotel.

The hotel is open all year (a great escape in the doldrums of winter) and includes themed rooms with interactive LEGO features, nightly children’s entertainment, a fitness center, character meet-ups, brick-building, and a resort-style heated pool during the summer. You can rent a cabana at the pool, and there is also a snack bar, fresh towels daily, and a lifeguard on duty. But perhaps one of the best perks of staying at the hotel is the early access to the park on busy summer weekends, where you can enter an hour before opening times. Can’t make it in the summer? Be on the lookout for special holiday events like Brick-or-Treat in October and Holiday Bricktacular from late November through December. LEGOLAND Park closes for the season on December 31 and reopens again at the beginning of April.

Melanie Bodner has always had a love for writing, but now she has a new love…being a mom. Before having her kids, Melanie was no stranger to writing or working with children. She wrote for a local newspaper as a reporter and taught English and Dance in a public school. Now Melanie enjoys spending time with her kids, doing yoga, writing and decorating her home. Check out her Instagram @burlapbythebeach.